Since our beta launch earlier this year, we’ve seen tremendous growth in sign ups, transactions, and customers raving about our product.

We are hiring a full-stack developer to join us in Montreal.

🇨🇦Canadians🇨🇦 use Shakepay to buy/sell bitcoin and pay their friends.

Bitcoin is important because it enables wealth to be stored with an individual without need for a third party, like a bank or a vault. Its fundamental use-case as a store of value with a predictable monetary policy will have profound implications on freeing individuals into financial sovereignty around the world.

Following Bitcoin, the entire suite of financials services is being rebuilt independently from the current financial infrastructure. We believe enabling access to these services is paramount to the creation of wealth and economic freedom.

We’re on a mission to create open access to building wealth.

Shakepay ships a lot of product for a small team. Our dev team is 2 full-stack developers, a tech lead (myself), and a product manager.

When you join, you will be jumping right into the action pushing code into production on your very first day. Examples of upcoming projects:

Dynamic trade execution (Node.js). This is at the core of our offering and finding the best rate for our customers involves analyzing trade potential on multiple exchanges, even jumping through different currency pairs (as described here).

Web interface (Vue.js). Our most requested feature is a web dashboard for interacting with Shakepay. We built a web onboarding flow and it’s been a smashing success at welcoming new users (NUUX). A full-featured dashboard is now top priority.

Facelift for mobile apps (React Native). Our apps are getting swanky redesigns. As we expand the product features, you’ll be designing new ways to send money, pay bills, buy and sell Bitcoin, store wealth, save for the future, and send crypto to a wallet on the blockchain.

Deploying on Kubernetes. The load on our infrastructure has skyrocketed over the last few months and we will need better devops to manage and scale our instances. Kubernetes is on the roadmap.

Make it work now, make it pretty later. When Shakepay launched earlier this year, the app interface was clunky and primitive. It looked like it was designed by database administrators. But it worked. We gave Shakepay accounts loaded with free money to early adopters in return for feedback. This allowed for quick iteration cycles, throwing away what didn’t work, and doubling down on what did. The same applies for the code we write today. That being said…

The boyscout rule. Or, leave things better than you found them. Some of us fantasize about a day when we will have no features to build and refactor our whole codebase into 20 lines of the most generic code ever written. Realistically, that day never comes. That’s why we “smuggle” refactoring when building features. Usually, 20% extra refactoring work per feature is considered healthy.

Don’t trust, testify. We’re dealing with money and sensitive user data so we have to be extra careful about code we put in production. Every line of code should be reviewed by other teammates before merging and every pull request must go through automated regression testing. All new code must have tests.

A day in the life of a Shaker

We’re all very different but here are a few things we all do:

Weekly sprints. Every Monday, we prioritize tasks into a weekly sprint on a Trello board.

Morning scrums. Every morning we quickly meet for a status update, 1-minute each.

Shake-and-tell. Every Friday, Shake-and-tell, which is essentially a show and tell. You have a few minutes to show something you’ve built this week. Everyone must present something to the team.

Working from home🏡. There are no set hours at Shakepay, you come to the office and leave when you want — or don’t come at all. Montreal is notorious for its cold winters and unreliable public transit so we work from the sofa or from a coffee shop nearby when we want.

Weekend projects. Totally optional but every so often a few of us come up with side projects that we just NEED to build. Some are relevant to Shakepay, some aren’t. Tap & pay, for example, started as a weekend project, as did Shakepay Instant.

Ownership. Equity is given to everyone at Shakepay.

We also appreciate inspirational modern art, take work trips to escape the winter, and occasionally bubble wrap ourselves and fight.

If you ever thought about joining a fast-paced, fast-growing startup in its early days, this is your chance. Reach out on our careers page or by email, tell us who you are and show us what you’ve built.

We’re on a mission to create open access to building wealth and you can be part of it. 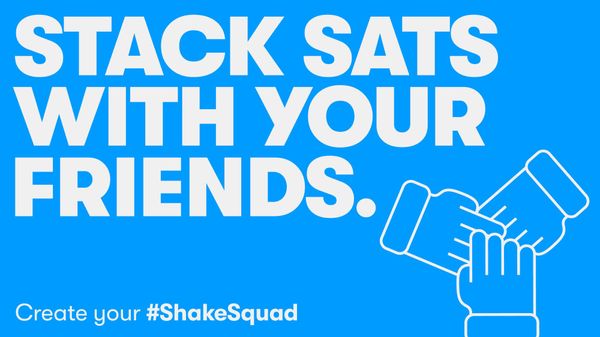 #ShakeSquads 🤝Join a #ShakeSquad with up to 4 other shakers to earn bonus sats on each other’s Shakepay Card purchases. Whenever a fellow squad member uses their Shakepay Card, everyone in the squad gets 42 bonus sats. We call these “bonus” sats because you get them on top of 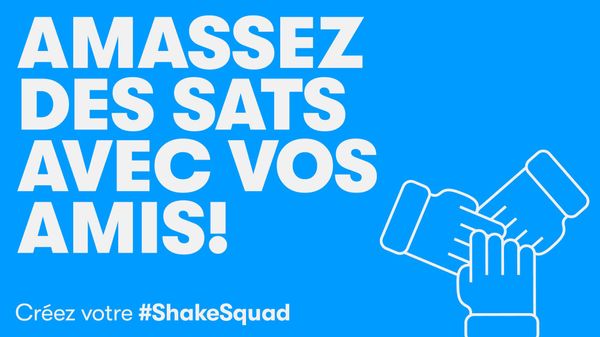 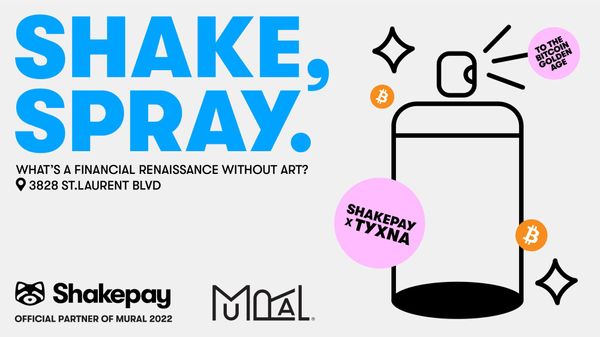 We’re taking the Bitcoin Golden Age to the street. Not just any street: the Main, our hometown’s iconic St Laurent blvd. In partnership with Mural Fest, the awesome Quebec artist collective, Projet Tyxna is  beautifying the wall at Moog Audio (3828 St Laurent Blvd) with their interpretation of